Earlier this week, I became aware of what could be an incredibly handy iPad app for Instructional Technology Coaches and administrators.  The app is called Eye Observe and, at least for now, it is available free in the App Store.  The purpose of the app is simple- provide a quick way to record educator observations, both notes and even video.

The app opens to a login screen at which you must create an account.  While not everything about the account is made clear, you are able to store observations to pull up later so hopefully that is the only purpose.  Once you are logged in, you are presented with a split screen. On the right is a live feed from you iPads camera above a blank area that you’ll later learn will display any video clips you have captured.  Below this area are a trio of buttons- New, Aggregate Reports, and Saved Forms.  Tapping New gives you a pop up men from which you can choose from four types of observation forms.  The included forms are Coaching, Record, Teaching Standards Assessment, and Technology Competency. 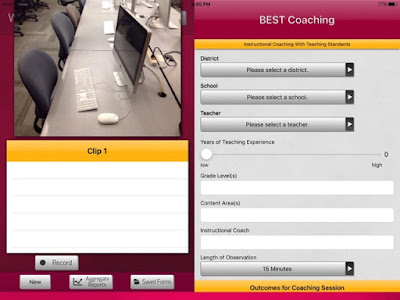 The Coaching form is a well designed guide to record an initial coaching meeting with space to record outcomes and action plan for example.  It even includes space for both Coaches and Teacher comments.
The Record form provides a quick, easy to complete form to record classroom observations, walkthroughs, conferences, really any type of interaction between a coach and a teacher or admin and teacher.  You still have the option to capture video or still images that can even have notes attached to them.
Let me skip down to the Technology Competency form for a moment and I’ll come back to the Standards Assessment in just a moment.  The Technology Competency form provides a nice observation tool to record much if the technology usage and integration that is observed by the coach or admin. A self assessment is also available.  This forms allows the observer to record the number of students engaged with different technologies as well as the tools, software or web resources being used, but also gas prompts to record what type of interaction is taking place.  The prompts seem well thought out and there is just a hint of some local influence; that is some competencies and strategies that may be common or even required in Arizona but may not be as common in other areas.  I do wish there were national references here such as the ISTE Standards or even a quick SAMR scale to measure the level of integration but as the author is from Arizona State University and the app is copyrighted by the Arizona Board of Regents, there may have been some specific goals the team was trying to achieve.
Which brings us back to the Teaching Standards Assessment form.  Once again, this is a well designed tool to quickly record observations in a variety of settings.  The description provided indicates that this could be used either as a formative, ongoing assessment but also as a sum native assessment.  It appears to be very closely aligned to the Arizona evaluation system but it demonstrates some wonderful features.  While the bulk if this form is a series of Likert scale items a quick tap on the information button for each displays the continuum for that item.
While I have not tried to create a large number of dummy forms, the Aggregate Report and Saved Forms buttons clearly indicate at lease the ability to record multiple observations and to compile some of that data.
Now for a wish list.  This is clearly a fresh project.  All information that I could locate indicates that the app is free…for now.  Hopefully the Board of Regents will continue to provide this app for free.  Possibly they could add the analyzing of additional data for Arizona users for a fee to subsidize the app overall. 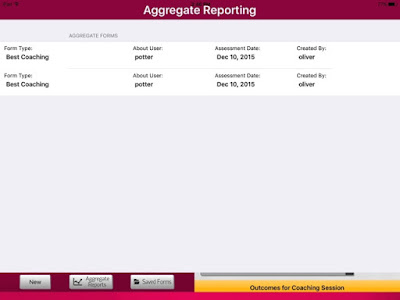 There is also the question of data security.  Is the data being stored on my device or, because I have logged in, is t being stored on a server somewhere?  Since this could include teacher performance evaluations, that answer needs to be made clear.

That login screen is a bit buggy too.  It works fine, almost too well.  Every time you leave the app, you are forced to login again.  This includes even if you simply jump out to check a text message or email.  During a full evaluation, this would get frustrating. (During the writing of this post as I jumped back and forth to detail the various forms, I have logged in 22 times.)
One promising thing is that it appears as if there is room for additional forms to be added.  This has great potential and could be the source of income.  I’d gladly download the app for free to have access to, say, just the coaching form, but take advantage of in app purchases for a few others, especially if they were less locally specific or even specific to my state.
All in all, this is an incredible handy app as it is and with a few tweaks and a reasonable pricing model would certainly find a permanent place on my iPad.  Hopefully the team will continue to make it available to the education community.
Eye Observe is available in the App Store at https://appsto.re/us/3e-zab.i.